Non-verbal Communication in the Courtroom 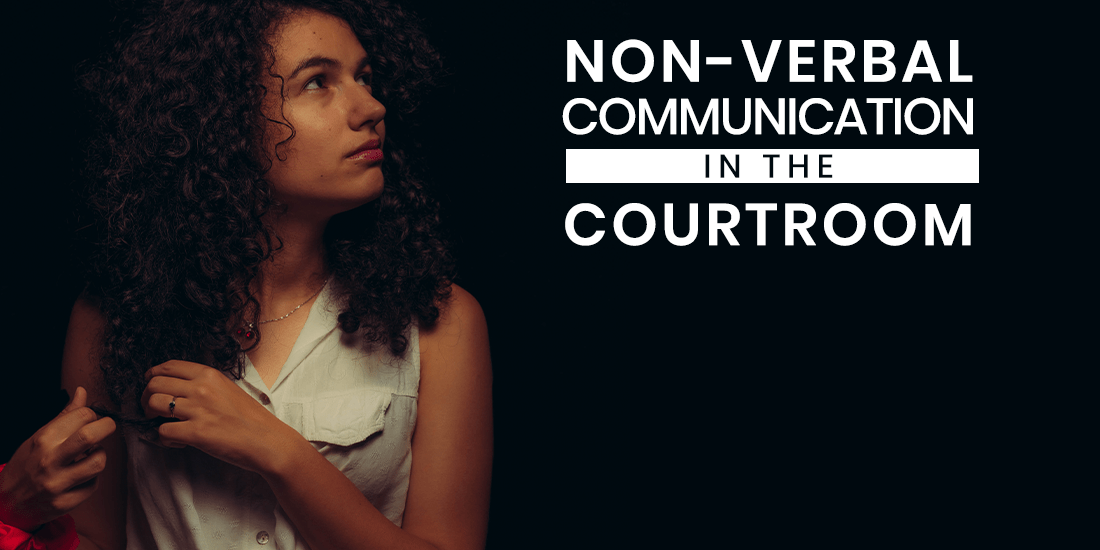 In life, even though you choose your words carefully, non-verbal communication – such as facial expression, hand gestures, gaze patterns, posture, and body movements – can lose you a poker hand, diminish your chances in a job interview, or even get you convicted by a jury.

In a court of law, the trier of fact (judge or jury) is not only legally authorized to consider a witness or defendant’s demeanor, but they are also encouraged to do so. The United States Supreme Court has long implored juries to assess a witness “by his demeanor upon the stand and the manner in which he gives his testimony whether he is worthy of belief.”[1] The Supreme Court of Canada has likewise asserted that “Non-verbal communication can…uncover uncertainty or deception, and assist in getting at the truth.”[2]

Although the use and analysis of non-verbal communication in court proceedings is as old as trials themselves, little is truly understood about it. This is especially true as it relates to its seemingly most popular function, distinguishing between liars and truth tellers. A common myth, popularized in the 1998, Samuel L. Jackson movie “The Negotiator,” is that the ‘eyes can’t lie’: someone looking up and to the right when answering a question is subconsciously accessing the right, creative, hemisphere of their brain instead of their left, rational hemisphere, subconsciously signalling that they are manufacturing a response rather than recalling information (“You’re lying Nebaum!”). It sounds like a plausible theory, especially when attributed to ‘neuro-physiology,’ so much so, that many police organizations, including the FBI, actively taught this and other theories during instructional seminars on witness interrogation and hostage negotiation.

The simple fact is that lie detection accuracy using commonly understood visual non-verbal cues, in study after study, rarely exceeds chance. The particular ‘eye gaze’ theory referenced above was heavily criticized by neuro-linguists and then conclusively debunked in a 2012 study by UK and Canadian researchers.[3] Likewise, research has shown that judges and juries hold erroneous beliefs about the reliability of nonverbal cues to detect lies. For instance, there is no empirical evidence that liars act nervously.[4]

It is no secret that Ontario’s civil court system is significantly backlogged, with litigants routinely expecting a 3-4 year wait for trial in the Superior Court of Justice. The 2016 Jordan decision of the Supreme Court of Canada mandated criminal trials – which use the same courtrooms and judges as civil matters – were required to proceed within 18-30 months from the point of charges, depending on whether they occurred in provincial or superior court, failing which even serious charges could be stayed (dropped) thereafter as breaching an accused’s right to a timely trial guaranteed in section 11(b) of the Charter. This served to exacerbate a then-existing backlog of civil matters which was only further compounded by the onset of the pandemic shortly thereafter.

I have previously argued that civil trials in Ontario should dispense with jury matters in all but the rarest of instances, such as for defamation cases, intentional actions or matters addressing punitive damages. Virtual technologies can save considerable time and expense and should be employed to expedite civil trials, where an individual’s liberty and criminal record history are not at stake, if only to forestall the truism that justice delayed is justice denied.

So, if non-verbal communication is not useful in detecting lies, of what use is it in a courtroom setting? Why don’t we dispense with the expense and uncertainty of jury trials in criminal matters as well? In short, too much is at stake.

Academic scholars in many disciplines have shown that in-person encounters serve a variety of functions aside from lie detection, including displaying affect (such as fear, relief, happiness), revealing attitudes (such as scorn, prejudice, skepticism), regulating interactions, managing impressions, revealing physical and mental conditions, and exerting interpersonal control (as in displaying dominance).[5] All of these subtle signals are important elements, taken together with the words used by witnesses and defendants, to form an impression, often subconsciously, of their credibility and trustworthiness.

The integrity of the criminal justice system, the importance of the Rule of Law and the right to face one’s accusers in an open court preclude the advisability of ever dispensing with personal attendance of all parties for criminal matters. If you’re ever called for jury duty, though, just don’t put too much stock in where a witness gazes when they answer, and remember, any court appearance – much less one which could decide a defendant’s vary freedom – is bound to make every accused person in the witness box ‘look nervous.’

Originally posted on The Drive