How Participatory is Democracy Really? 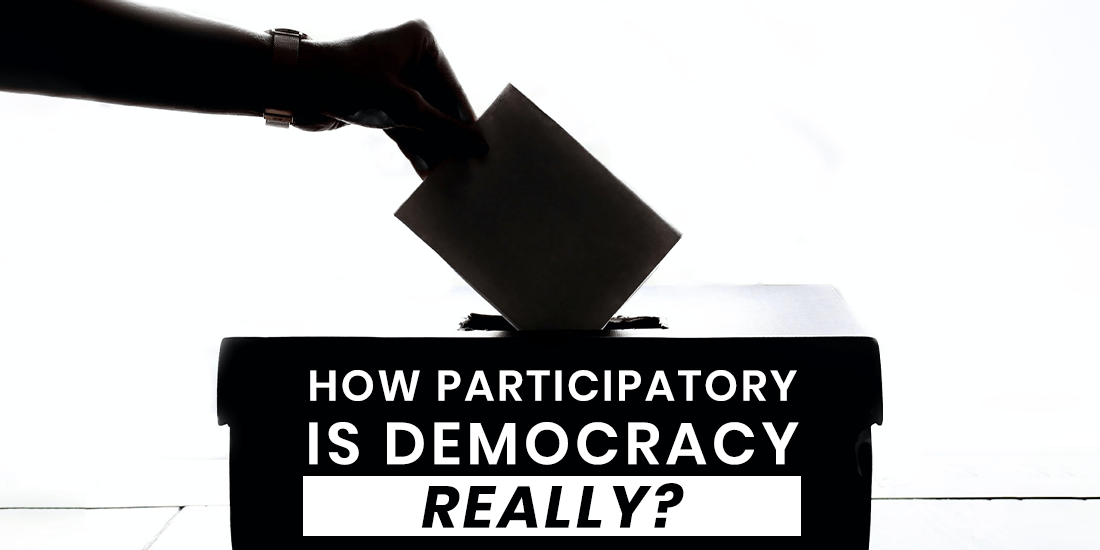 A story on CTV’s website in early August reported that, although an overwhelming majority of registered Conservatives supported Pierre Poilievre for leader of the Conservative Party (44% to 17%), most Canadians preferred Jean Charest to become leader of the party, with a larger percentage of voters indicating they would not vote Conservative in the upcoming federal election if Poilievre becomes leader.[1]

This is important because it would seem, if online chatter, bumper stickers, and random rural roadside protest signs are to be believed, Pierre Trudeau’s eldest child is not long for the Prime Minister’s office, and no other national party enjoys more than 20% support.[2] I have previously complained that his current Liberal government enjoyed only a paltry 32.6% in nationwide popular support in the election – the lowest in Canadian history by the way.[3]

Partisan politics have become so divisive that there is no even-handed, conciliatory, national government anywhere on the horizon – only polar opposites. The average Canadian is essentially left with two choices: the increasingly leftist Liberal government which seemingly can never spend less, or the same amount, than it recovers in revenue and believes there is no reasonable limit on the kind and amount of tax the average Canadian can withstand – or the rigid, socially intolerant Conservatives who struggle to subdue their puritanical religious element from dominating most policy debates and is oblivious to the environmental realities of the day.

Not much of a choice for centrist Canadians (which I believe defines most of us). And no, the NDP are not a realistic alternative – they are really only useful as a conscience guardrail for the other major parties. Since their most thoughtful, well-spoken, and earnest leader at any level to date, the Rhodes scholar Bob Rae, demonstrated that the party’s philosophy couldn’t stretch enough to govern Ontario successfully in the 90’s when he was Premier, without invoking the ‘social contract’ legislation that cut directly into public labour’s interests, no national leader stands a chance of convincing disparate Canadians in every region to given them a chance to govern nationally. And, as their unionized manufacturing base (indeed the middle class) continues to shrink, and regional parties (like the Parti Québécois or the former Canadian Alliance) bloom, flourish and then subside, there is little chance the NDP ranks could swell enough in any national election cycle to threaten national governance.

If my anecdotal conversations with others on the subject are any indication, most Canadians simply want a government that is: i. free from corruption (as much as that can be accomplished in a system of men and women); ii. built upon and committed to democratic rights and laws – free from secular, dogmatic religious influences; iii. practical and predictably focused on the majority’s concerns; and iv. forthright and frank about its vision of Canada and plans to attain it – unlike the ridiculous theatre on display in the House of Commons’ question period. In short, socially liberal, and fiscally responsible.

Is this so hard? Am I pathetically naïve?

So, you want to participate? You want to make a change? The Conservative Party of Canada’s website contains 21 “governing documents”, addressing its Constitution, organizational rules, and current policy declarations – running 285 pages of legalese that would strain even a lawyer’s comprehension. The Liberal Party’s website disclosed 18 such documents running over 108 pages (not counting “Platform Commitments” – of which there were no fewer than 192 separate documents).

To become a candidate, you will need to ‘win’ your riding association’s nomination, a separate contest for which you will have to sell party memberships to friends, relatives, acquaintances, and strangers who live in the riding, and nag them to attend to vote at the nomination meeting. If you become a party’s candidate for your riding, then the real work begins. You will need to recruit a team of volunteers, spend at least a few months of organization and full-time campaigning (during which time you will almost certainly need a leave of absence from your job and will be unable to earn income). Stop right there: How many of the people in your social circle can afford to do even that?

Campaigning is difficult work: who likes constantly asking people for money or support? If you survive the doors slammed in your face (sometimes literally), the online trolls and critics can be heartless. Opposing candidate organizations constantly take your signs, generate ‘public’ complaints about your campaign to media, regulatory authorities and misrepresent and disparage your positions and character at the door.

Unless you’re well-connected with the existing party establishment, or are otherwise extremely qualified or famous, even if you win, you will become a back-bencher, often finding out about your cabinet’s decisions at the same time as the general public. Rigid party discipline means that, except in the rarest of circumstances, you will not be able to vote your conscience and will be told how to vote, upon pain of expulsion from the party for disobedience. You will have about as much impact on policy decisions as a regular citizen, and less so than one with a public profile or platform.

The modern Premier and Prime Ministers’ offices centralize far more decisional power than in the past. In reality, the person holding this office, and a cadre of probably no more than a handful of advisors (many unelected and all exclusively focused on re-election) run the province or country, as may be – far less on principle, or past promises, than current public favour.

This is modern democracy and political participation – the greatest form of government in the world. No wonder such a large portion of the electorate don’t care, don’t vote, and can’t participate in any meaningful way.