Please ensure Javascript is enabled for purposes of website accessibility
HomeRecent NewsResourcesBill 124: Superior Court of Justice Calls Out the Province for Crying Wolf

Bill 124: Superior Court of Justice Calls Out the Province for Crying Wolf 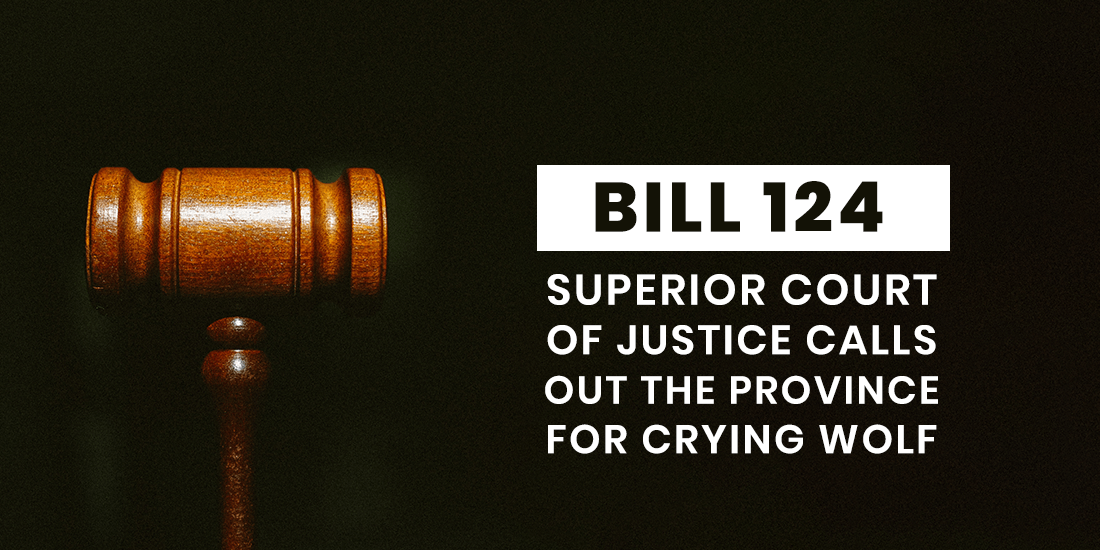 “Where free unions and collective bargaining are forbidden, freedom is lost.”[2]

On November 29, 2022, the Superior Court of Justice struck down as unconstitutional the provincial Conservative government’s Bill 124. Passed in June 2019, this piece of wage restraint legislation’s most objectionable provision limited wage increases for approximately 780,000 workers in the public sector to 1% per year for a 3-year moderation period. It came into force for all bargaining units on the expiry of any collective agreement that was in force as of June 5, 2019. As a result, at the time of the Court’s hearing the Act had already affected some bargaining units but not yet others whose previous collective agreements had not yet expired.

The 1% cap on compensation was broadly designed and mercilessly unforgiving: “anything paid or provided, directly or indirectly, to or for the benefit of an employee, and includes salary, benefits, perquisites and all forms of non-discretionary and discretionary payments.”[3] This meant that any increase to employee benefit plans or pension plans would count against the 1% limit: meal allowances, parking, expense allowances for personal protective equipment, vacation time or bereavement leave were all quantified as part of the 1% cap. As the Court pointed out “awarding employees one day of bereavement leave that they did not already have comes to 0.385 of their annual salary. Awarding three days of bereavement leave would exceed the 1% salary cap.”[4]

Of the arguments made by the unions (the Application was brought by the Ontario English Catholic Teachers Association but joined by another 9 provincial and federal unions as intervenors), the Court rejected the claim that the law infringed their freedom of speech (contained in s. 2(c) of the Charter) and equality rights (contained in s. 15), but agreed that the Act infringed their collective bargaining rights and right to strike – both of which have been held to be protected within the ambit of the Charter’s s. 2(d) right to freedom of association in previous, binding decisions.[5] Those decisions held that s. 2(d) is infringed if a government measure “substantially interferes” with collective bargaining[6], although, as with all infringements, the government could potentially prevail if it could establish, according to the analysis required under s. 1, that the infringement was “subject to such reasonable limits prescribed by law as can be demonstrably justified in a free and democratic society.”[7]

After reviewing relevant authorities and the evidence submitted by the applicants, the Court had no trouble determining that the Act profoundly interfered with these rights, and breached the Charter, and then moved to a consideration of the s. 1 balancing considerations. The government’s justification arguments – all of which read like contrived and vague notions, such as “to manage the Province’s finances in a responsible manner and to protect the sustainability of public services”[8] – were carefully evaluated and rejected as unspecific hyperbole.

Against those poorly articulated reasons, the unions were able to establish that, at the same time as the Act was imposed, the government was pursuing a course of large tax cuts: it announced proposed cuts of $4.3 billion in 2019, $4.1 billion in 2020, $5.7 billion in 2021, $7 billion in 2023 and $3.8 billion in 2023 and they established that there were a further $9.9 billion of unannounced cuts embedded in government projections. Additionally, the unions pointed out, the government then eliminated $1 billion per year in revenue from vehicle license plate stickers, and refunded drivers any monies they had paid for those same stickers in the previous two years. Yet, in the face of all of those cuts, the government’s own budget expert estimated the cost savings achieved by the 1% pay cap at only $400 million per year.[9]

The Court was ever mindful of the deference to be accorded to the Legislature and the concern that it could be seen as intruding upon its legislative function. But, after comparing this legislation with historically acceptable wage restraint legislation, it determined that the government’s own budget expert agreed, under oath, that Ontario was not facing a “severe financial crisis” of the type which justified similar measures elsewhere in Canada’s judicial history. After concluding that some economic conditions have been, and could be, sufficiently serious as to justify overriding a Charter right, Justice Koehnen determined that the government had failed to establish that June 2019 was such a time in Ontario, declaring that: “Ontario has not, however, explained why it was necessary to infringe on constitutional rights to impose wage constraint at the same time as it was providing tax cuts or license plate sticker refunds that were more than 10 times larger than the savings obtained from wage constraints.”[10]

Ultimately, the Superior Court denounced the government’s legislation, and characterized the Act’s passage as an attempt to avoid labour conflict: “Ontario was imposing a statutory limit of 1% on wage increases because it feared that taking that position at the bargaining table would lead employees to exercise their constitutionally protected right to strike. That does not amount to a reasonable limit on the right to collective bargaining that can be demonstrably justified  in a free and democratic society.”[11]

The ultimate remedy and what happens next has been reserved for a future hearing.